The project set this week aimed to push us to think about how our ideas could be transferred into 3D objects. It also tested our 3D making skills.

We were each given a different society/organisation of which we had to design and make a creative envelope for. The organisation which I was given was the English Wine Producers.

After mind-mapping a few different ideas, it became clear to me that there was a strong link between the items which wine is stored in (e.g. barrels, bottles and glasses) and the way a letter could be essentially ‘stored’ within an envelope.

I experimented first with making a few quick paper mock ups of barrels, glasses, wine bottles and so on. After remaking and redesigning my mock ups a few more times, I then realised that I could make a variety of different shapes of wine glasses/bottles as often wine is separated into three varieties.

I decided to design my envelopes so that they would be part of a set of three. One being white wine, another, red wine, and finally, rosé wine. I altered the shape and style of each envelope design so that there would be variety in not only the coloured appearance but also the shape too.

I wanted my envelopes to look equal (even though they were different sizes) when they were placed next to each other. This meant that my next challenge was to re-mock up my envelopes to see how they would fold and protect the letter inside.

This was a small challenge because of how different the wine bottle shapes were. I also had to consider where the flap for the top of the envelope would fold over and slot in place.

I then emailed Fedrigoni (an Italian Paper supplier) who kindly sent me some paper samples in the colours that I had requested (red, green and pink) and begin to mock up my bottles in the correct paper weights.

After a few trial and errors, I made my three different ‘wine bottle’ envelopes. The decision to add labels on the front (for the address etc.) which resembled a wine bottle label came at a later stage because after discussion with my course leader, we decided that the wine bottles appeared too plain. 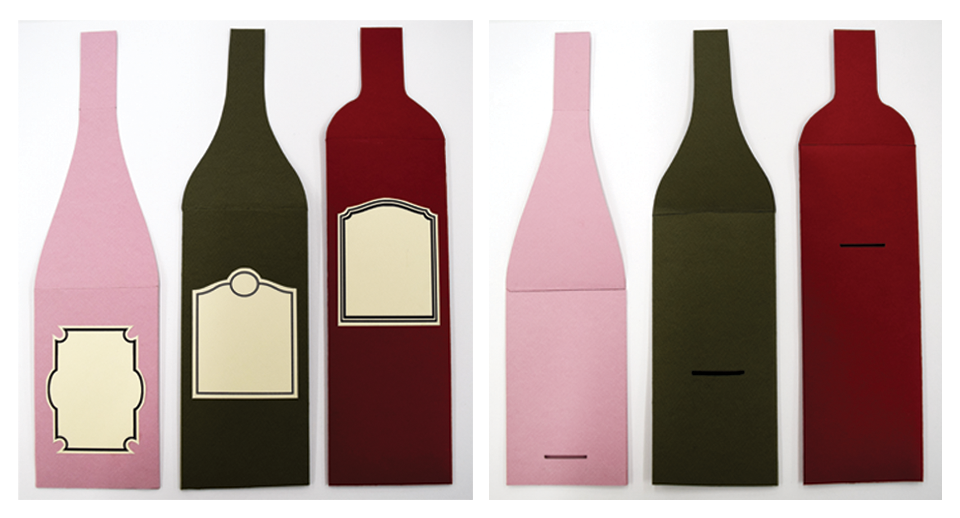