My third project during the second semester focused on branding a new business or rebranding a current business.

We were each given an occupation/business to brand- mine being a Fishing Tackle Shop. I did not know much about fishing in general, so my first point of call was to visit a fishing tackle shop and get a good grasp on the whole industry.

** P.S. This project has been improved since this post, please view my portfolio to see the updated version **

My grandparents live on the coast so I took the opportunity whilst visiting them to also visit a tackle shop local to them. Keith’s Sports (http://keithssports.co.uk/) located in Saltburn by the Sea was the place I visited.

I was not sure what to expect, but Keith and his staff were extremely approachable and helpful with any questions that I had. I even had a tour around their shop- it appears of average size from the outside but they have a massive basement below to showcase hundreds of items of fishing tackle- I was very surprised!

Keith and his son talked me around the shop, demonstrating items and explaining how and why they would be used by fishermen. For me, this was extremely important and useful as I literally had no idea about fishing!

I took lots of photographs with Keith’s permission and his colleague provided me with some DVD’s and some more brochures on the products they stocked. I had not realised the breadth that fishing tackle covered- yes, there are your well-known waders, fishing rods and lines but tents, sleeping bags, shoes and tackle box chairs were items I had not considered. 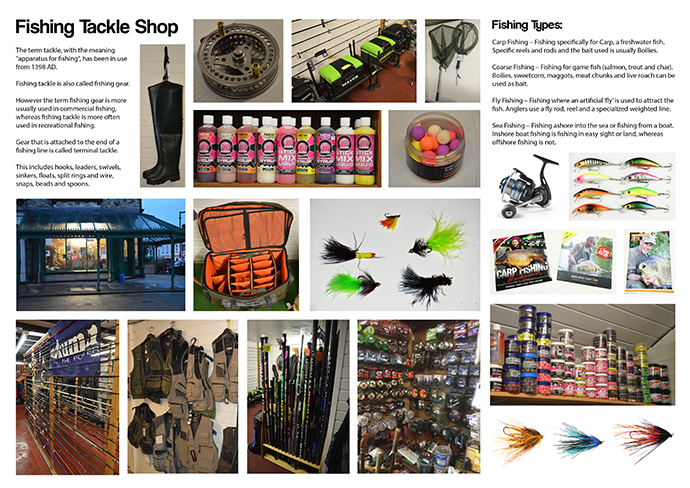 After compiling my research together, I presented what I had found to Mark, the visiting lecturer who would be overseeing this project. He advised that I looked on Re Sydney’s website (http://re-sydney.co) as there was a photographer branding project that could be of inspiration (VIS-UAL-AZ).

After doing this and looking into other fishing related brands using websites such as Behance and Pinterest, I began to come up with a list of names that I could call my fishing tackle shop.

I have to admit, some of my early ideas were extremely cheesy- yes, they did include fishing puns such as ‘House of Cod’ and ‘A Plaice for Fishing’. With a few tweaks I suddenly came across a name that seemed to stick- Hook, Line and Sinker. I decided now that I would use this name as a basis for my brand design.

I started off my design almost using the same colours seen by VIS-UAL-AZ, the photography business I have previously mentioned. I mixed green with a 100% black- something which I later realised I should not have done. Often with designing digitally, you don’t realise how stark a colour will look until it has been printed out- I therefore found at my first crit that the black was too much compared to the other colour.

At my first crit I also presented an alternative idea. I used the words Hook, Line and Sinker as icons instead. One for each word and an ampersand, essentially.

Mark advised that I continue to develop both of my ideas at this stage and seeing which progressed further over the following week.

We both decided that the version with the symbols had far more potential that the other idea. I therefore developed this further over the next few weeks.

One of the things I originally was not happy with was the ‘line’ (one of my symbols). I felt that because this line also had a hook on, it was defeating the objective of having a hook next to it. I therefore removed the hook from the line and made each icon look as though they were more of a part of a set. I did this by adjusting line thicknesses and altering the icons where necessary.

After much development over the past couple of weeks, I had my final logo and this enabled me to tweak it to what was required for the brief. Stationary wise, I had to produce a letterhead, compliments slip, envelope and double sided business card. 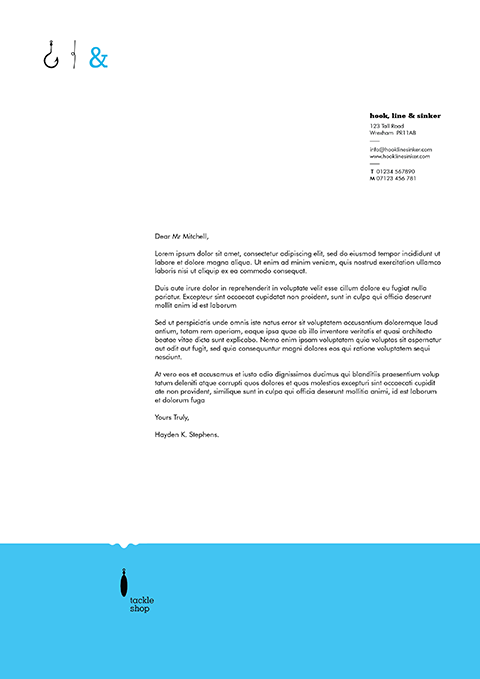 Business card Front and Back: 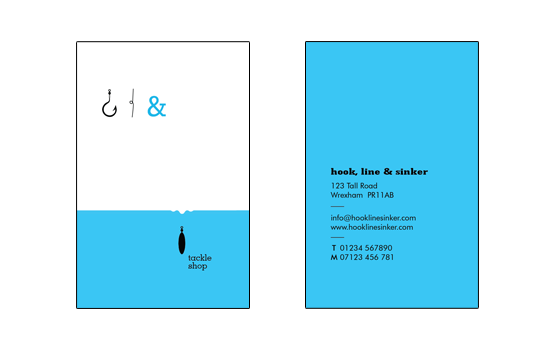 Compliments Slip, Envelope Front and Back:

We were also asked to design and alter our brand so that it would fit onto products or vehicles appropriate with our profession/business. In my case, I chose to apply the brand to a tackle box, fishing rod box (by making a scaled down model) and product boxes. 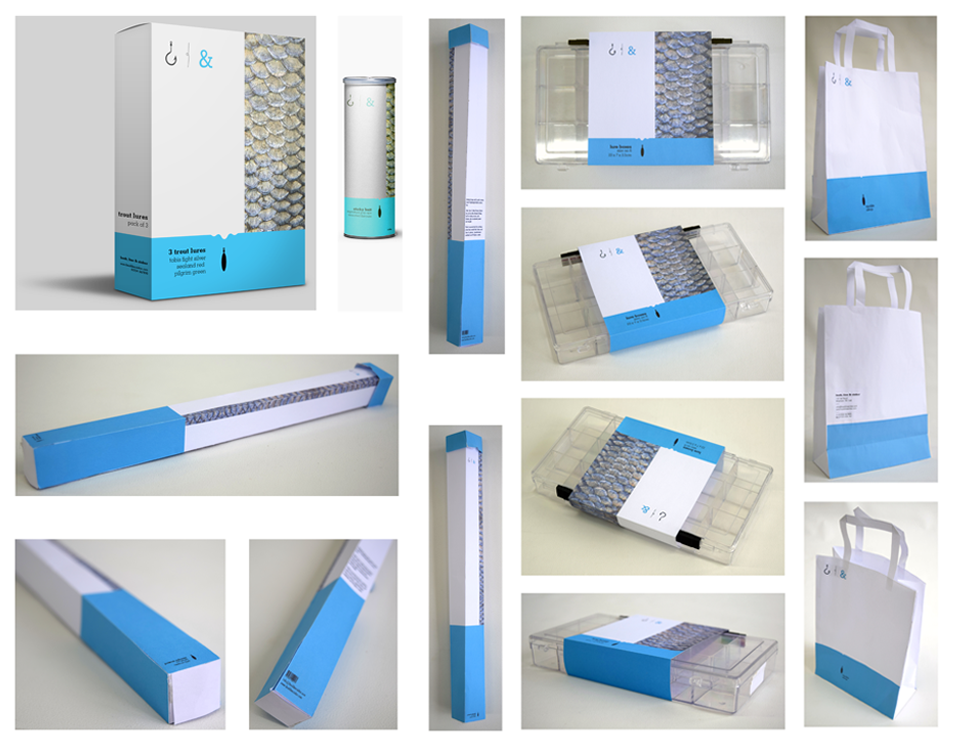